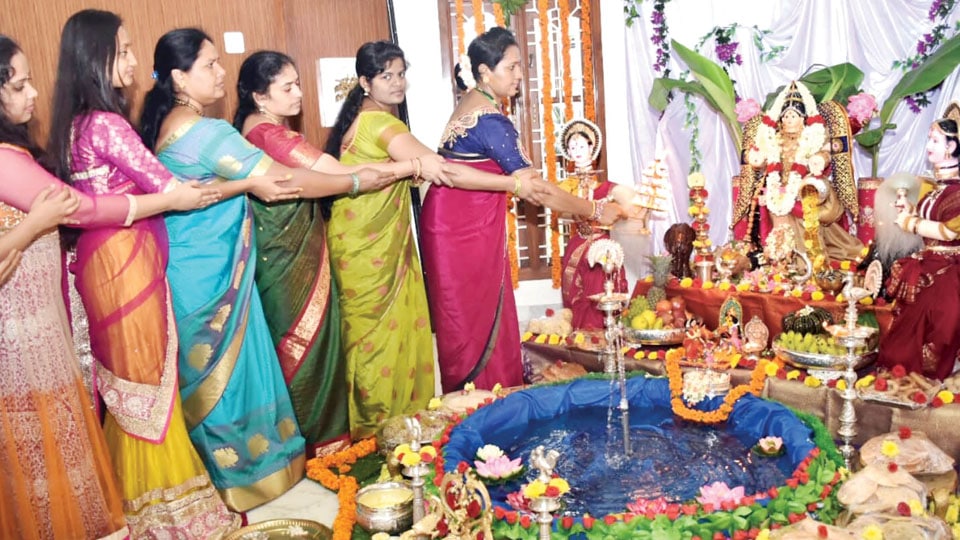 Mysore/Mysuru: Amid the spread of the COVID-19 pandemic, the people of the city, especially the women folk, celebrated the traditional Varamahalakshmi festival today.

The festival, which is celebrated on the second Friday of Shravana month every year, saw women worshipping Ashtalakshmi — the Eight Goddesses of Wealth, Earth, Wisdom, Love, Fame, Peace, Contentment and Strength — at their homes with utmost devotion offering fruits, sweets and flowers.

Marking the festival, a Kalasa (representing the deity) was decorated with a sari, variety of flowers and gold jewellery, with offerings such as home-made sweets and phala tamboola placed in the altar.

The traditional  Hindu festival goes by the name Vara Mahalakshmi Vrata, with women performing the Vrata by offering prayers seeking the blessings of the deity in the form of wealth and well-being of their family.

Special pujas marking the celebrations were performed at several temples of the city.

At Amruteshwara temple on Dewan’s Road, the deity was decorated with currency notes and coins of all denominations in keeping with the past tradition and customary rituals were performed. The deity at Mahalakshmi temple near Netaji Circle in Dattagalli was adorned with Hasiru Thorana and colourful lightings.

Many women were seen inviting married women in their neighbourhood for offering them phala tamboola and kunkuma.

Varamahalakshmi  Vrata is a festival to propitiate Goddess Lakshmi. Varalakshmi is one who grants boons and it is believed that worshipping Goddess Varamahalakshmi on this auspicious day is equivalent to worshipping Ashtalakshmi.

Over the past three days, the  temporarily shifted flower market at J.K. Grounds saw big crowds, with people purchasing flowers for the festival, the first in the series of festivals that follow during the Shravana Maasa.