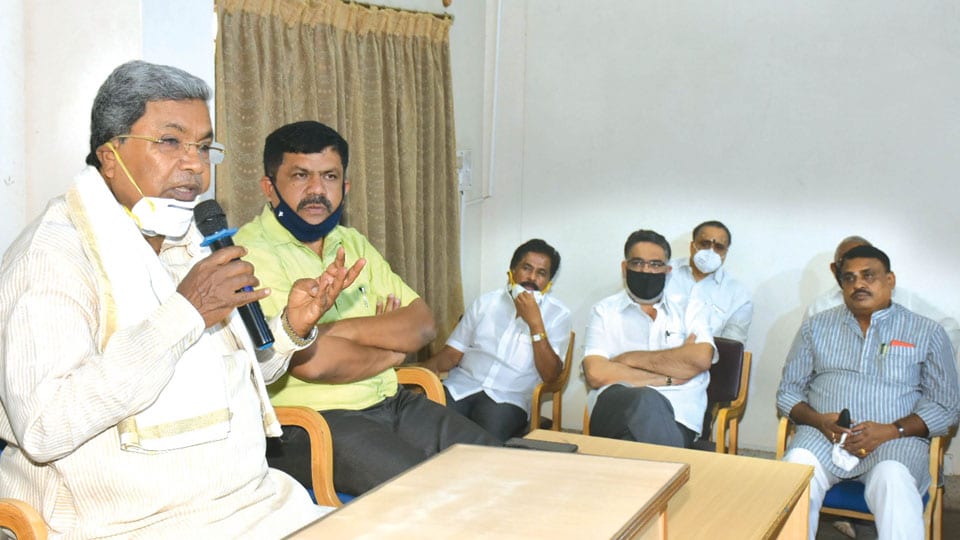 Mysore/Mysuru: Alleging that the BJP Government  made amendments to the Land Reforms Act bowing to real estate lobby, Opposition leader and former Chief Minister Siddharamaiah maintained that the amendment is the biggest treachery against the farming community.

Speaking at a  media interaction organised at Mysuru District Journalists Association (MDJA) on Thyagaraja Road here yesterday, Siddharamaiah said that  while former Chief Minister D. Devaraj Urs had amended the Karnataka Land Reforms Act favouring the farmers (The tiller is owner of land), the current BJP Government had amended the Act disfavouring the farmers (The rich is owner of land).

Stating that most of the farmers are small farmers owning just 2 or 3 acres of land, he said that the amendment will make the farmers lose their land holdings resulting in the return of the ‘Zamindari’ system of the past, as only the rich and industrialists can purchase the land without any hurdles.

Accusing the BJP Government of giving a go by to social justice, Siddharamaiah said that the BJP’s anti-people stance can be seen by the amendments made to APMC, Land Reforms and Essential Commodities Acts.

Asserting that the 10 percent reservation for the economically backward upper castes as unconstitutional, he alleged that the BJP as indulged in horse-trading to bring down the Congress Government in Rajasthan just as it did in Madhya Pradesh.

He also came down heavily on the State Government for dropping chapters on Jesus Christ, Mohammad Pygambar, Tipu Sultan, Sangolli Rayanna, Rani Abbakkadevi and such other iconic personalities from school text books.

Alleging a big scam in Medical equipment purchase, he wondered why the BJP MPs from the State are silent over the Centre’s step-motherly attitude towards the State. He also questioned the propriety of spending huge money on advertisements marking the BJP Government’s one year in office. Siddharamaiah charged the Government of failing to adequately respond to the steps that were required to be taken for containing the spread of the deadly COVID-19 pandemic.