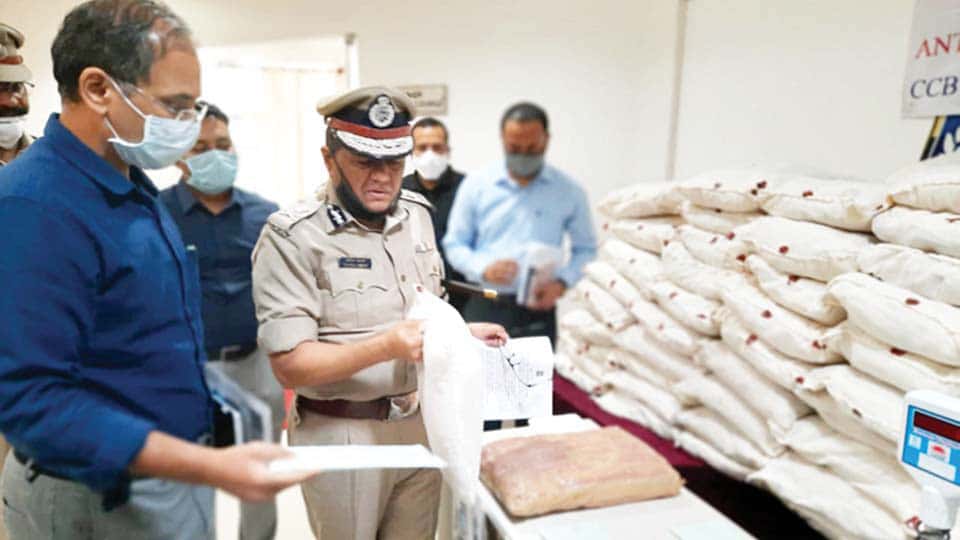 Mysore/Mysuru: The Central Crime Branch, Bengaluru, has cracked a drug racket and seized 204 kgs of marijuana (ganja) worth Rs. 1 crore that three people were transporting in a truck (KA-51-AB-4233) from a village in East Godavari, Andhra Pradesh.

Acting on a tip-off, a Police team tracked down the shipment and intercepted the truck near Devanahalli on the outskirts of Bengaluru. The accused – Sameer, 37 and Khaiser Pasha, 41, both of whom hail from Mysuru and Ismail Shariff, 38 from Chikkaballapura – had allegedly concealed the marijuana in the truck.

At a press conference on Thursday, Bengaluru Police Commissioner Kamal Pant said that the accused procured the substance from a village in East Godavari district and through a well-established network would supply to their contacts in Bengaluru, Mysuru, Ramanagara and Chikkamagaluru.

The three arrested allegedly confessed that a majority of their clients were college students and small-time peddlers from several towns across the State. According to the Police, the accused also had contacts in Tamil Nadu and Kerala. The CCB is further investigating the case to ascertain possible links of others in the racket.

Khaiser Pasha had contested the previous Mysuru City Corporation elections from Ward 33 (Shanthinagar) on a JD(S) ticket and had lost the polls.